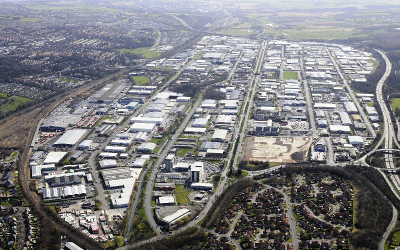 Established in 1937 as the UK's first industrial estate, the area is now home to 700 businesses and over 25,000 employees. It continues to remain one of the largest commercial estates in Europe.

Team Valley provides a range of office and industrial premises, in a well laid out, attractive environment. It has direct access to the A1(M), great public transport and is close to the urban core.

The area benefits from ongoing investment and upgrades. In 2016, the nearby A1(M) received an injection of £70 million. It widened the network, resulting in a significant improvement in efficiency and connectivity.

Further investment is also taking place in the development of the Dukesway Central. This is our first major industrial scheme without public sector intervention since the economic downturn in 2008. It's a clear sign of confidence returning to the market in Gateshead.

There are further plans for development of three office buildings:

Team Valley has benefited greatly from the recent upgrade of the A1 Western Bypass and we were particularly attracted to this opportunity due to the strength of its strategic location within the region's largest business park.
Spokesperson for Bronze Investments