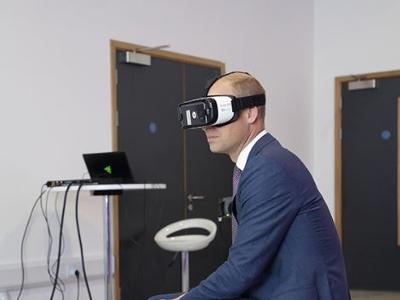 As part of the Great Exhibition of the North, His Royal Highness The Duke of Cambridge officially opened PROTO: The Emerging Technology Centre during his trip to the region on Friday.

Located in Baltic Quarter, Gateshead, PROTO is an £8 million-pound, state-of-the-art research and development facility (R&D) for organisations to test and create digital solutions. The centre, which is also part of Digital Catapult NETV, will encourage and support organisations to adopt new technologies including virtual reality (VR) and augmented reality (AR).

During a tour of the facility, The Duke was taken through a futuristic style tunnel connecting PROTO's office space to the R&D facility and was then introduced to three of the North East's most innovative digital companies: Animmersion, Hammerhead VR and Mixed Immersion.

Animmersion showcased a piece of VR content that they've produced for a manufacturing client; Hammerhead VR, who are based in PROTO, showing how VR is being used in the games industry using an Oculus Rift VR headset; Target 3D demonstrated how motion capture works, by using live actors in motion capture marked suits, whose actions and motions drove the movement of a 3D character which was projected onto the wall of the 2,024 ft2 multipurpose R&D hall. His Royal Highness then put on a VR headset to be immersed into a special performance by the Philharmonic Orchestra before officially opening the building.

PROTO is funded by Gateshead Council, the European Regional Development Fund (managed by the Ministry of Housing, Communities and Local Government) and the North East LEP through the Local Growth Fund.

Cllr Martin Gannon, Leader of Gateshead Council welcomed His Royal Highness to PROTO and explained: "We're delighted to have The Duke of Cambridge in Gateshead to open this cutting-edge facility as part of the Great Exhibition of the North. PROTO demonstrates to multiple sectors, including education, manufacturing and creative, what possibilities emerging tech can bring to their business. Access to this technology is usually very expensive but PROTO offers an inexpensive alternative by providing access as and when companies need it. By removing one of the biggest barriers to entry ie cost, Gateshead Council is giving businesses, particularly SMEs, access to the tech needed to digitalise their own business or develop innovative new products."

Helen Golightly, Chief Executive at the North East LEP, said: "Having access to the technology offered by PROTO will be invaluable for our region. It will not only serve to encourage more businesses to start their innovation journey and explore the potential for the commercialisation of their ideas and concepts, but it will also strengthen our already thriving digital sector which is identified in our Strategic Economic Plan as being a key area that provides an opportunity for growth within the North East economy."