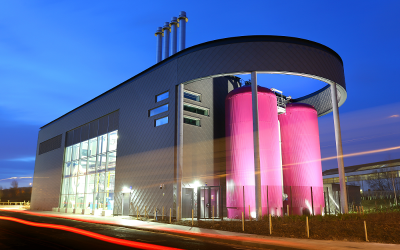 A ground-breaking energy scheme that will cut energy bills and carbon emissions for homes and businesses in Gateshead was launched today by the Minister for Industry and Energy.

Jesse Norman MP, Parliamentary Under-Secretary of State for Industry and Energy, visited the newly-completed Gateshead District Energy Centre on Quarryfield Road next to Gateshead College to tour the building and formally hand over the keys.

The first of its kind and scale in the North East, the futuristic-looking District Energy Centre houses a small but highly-efficient power station which will generate and supply low-carbon, low cost energy for up to 350 local homes and businesses via a new underground network of high voltage 'private-wire' electricity cables.

However, unlike conventional power stations, Gateshead's District Energy Centre is capable of capturing up to 85% of the waste heat created during the energy generation process and this can then be fed directly to public buildings, businesses and people's homes via a network of underground heat pipes.

The first buildings to take advantage of the energy centre include Sage Gateshead, Gateshead Civic Centre, Gateshead College, BALTIC and residential housing in central Gateshead, and all should be receiving heat and power by the summer.

The energy centre has been designed to meet the energy needs of future developments planned for Gateshead town centre, and will underpin the redevelopment of the 21-hectare Baltic Business Quarter business development site and wider Gateshead Quays area. Other areas to be connected to the system include future housing developments at the former Freightliner site, and the former Chandless estate where up to 1,000 new homes are planned.

Leader of Gateshead Council, Martin Gannon, said: "This is an important project which will give our area a real cutting edge

"Our District Energy Centre is twice as efficient as a conventional power station, and far greener, and we can pass on some of those cost efficiencies to local people and businesses in the form of cheaper heat and power. This alone will make a real difference to people's lives.

"However, the commercial advantages offered by cheap heat and power will be obvious to incoming businesses and we believe this is likely to drive up demand for business space here in Gateshead, something that should help to generate much-needed new jobs.

"We are also helping to substantially reduce Gateshead's carbon footprint.

He added: "This project clearly demonstrates what a forward-thinking local authority can deliver, and the kind of resources we can marshal to deliver a complicated and innovative development such as this. I hope it shows that our commitment to local people and to local business remains undiminished by the financial hardships that we are suffering."

Gateshead District Energy Centre uses a pair of 2MW gas-powered combined heat and power (CHP) plants to generate enough electricity to power 5,000 homes, with the waste heat from the engines being recovered to provide hot water for heating. In conventional power stations this waste heat is simply lost to the atmosphere.

The project has been funded entirely by Gateshead Council, without use of grants or subsidies, and is expected to be fully self-financing, with construction and operating costs recouped over the life of the project by energy sales both locally and to the National Grid.

The scheme recently partnered with demand-response company Flexitricity in a £1 million fifteen-year deal to supply electricity to the National Grid during peaks and troughs in national electricity demand.